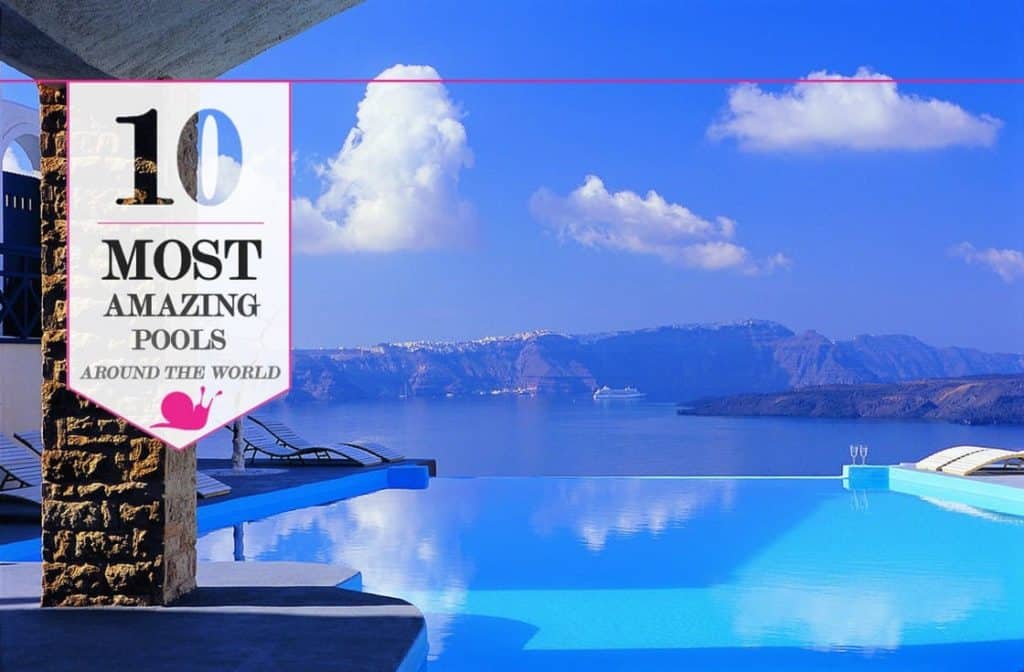 Summer is here and the heat is already unbereable! So if you’re trapped in an office, in a classroom or you’re simply just sweating at home on your couch, we know exactly what you need: a little day dreaming!

We have gathered 10 of the most exotic swimming pools from across the world, from Greece, through Bangladesh and all the way to Bali, Indonesia. Just stop whatever you’re doing for a few minutes and fantasize about jumping head first in each of these pools full of sparkling, cool and refreshing water.

It’s time to pack your bags and take a dive! 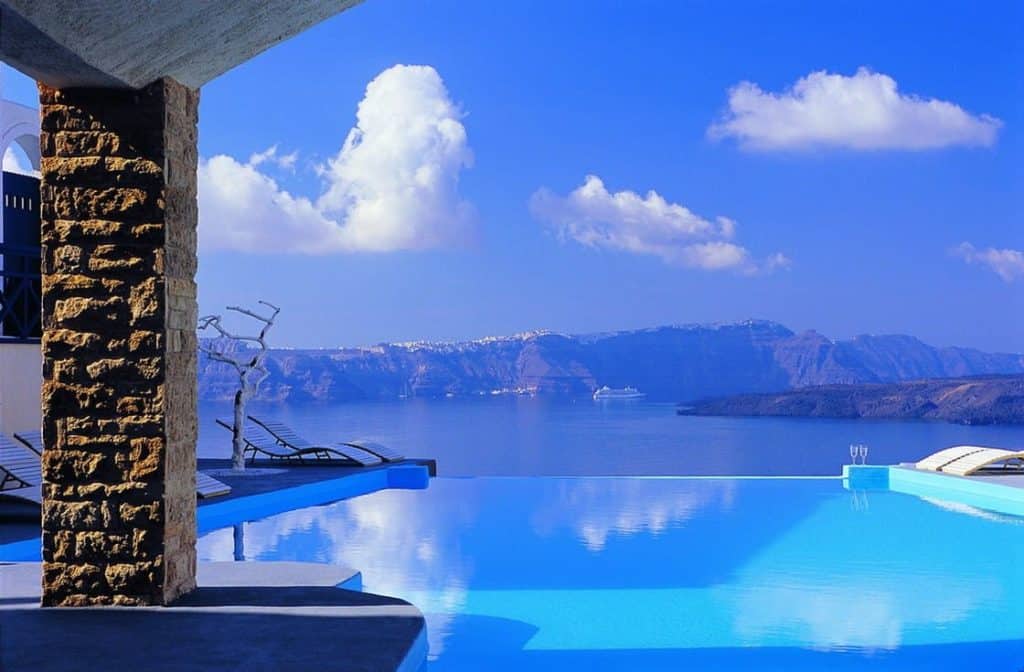 Astarte Suites is a spectacular 9-room complex designed by Aygoustis Krousis and located on a cliff on the beautiful Santorini Island in Greece. Small, but with impeccable services, infinity pool, and unforgettable views, the hotel is perfect for a romantic getaway. [Read more] 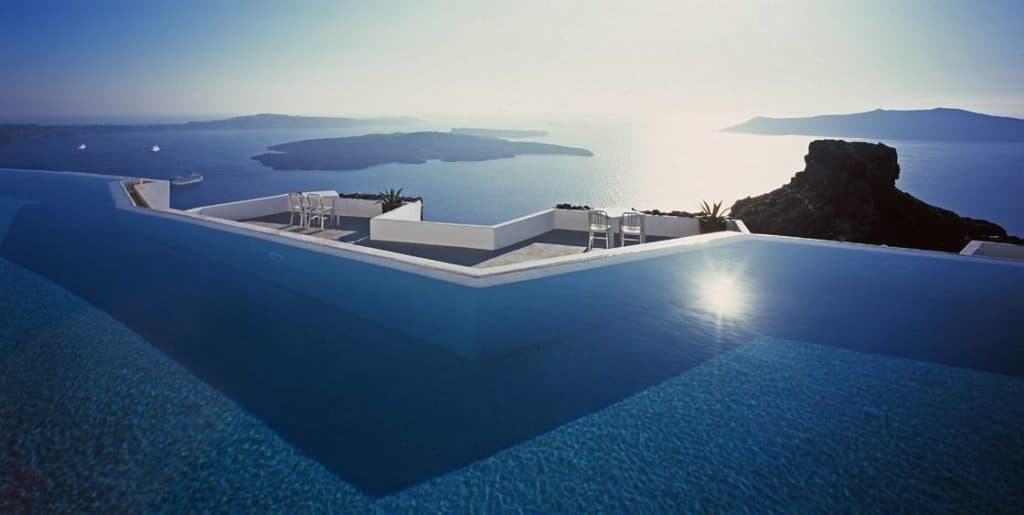 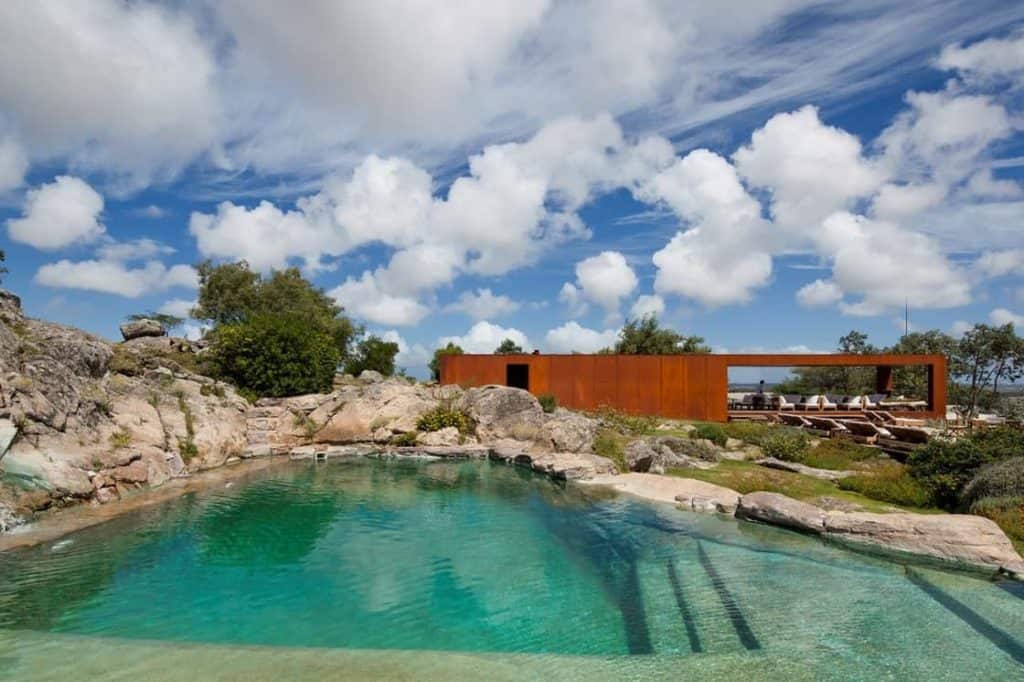 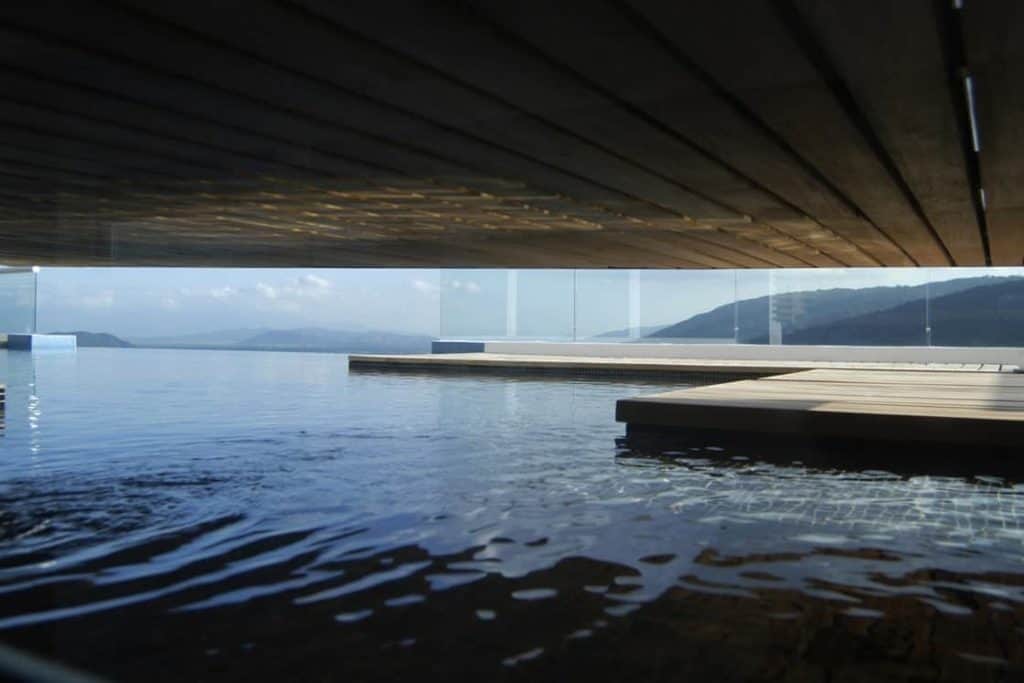 A spa and rooftop pool were designated to sit atop a 20 storey apartment building in San Pedro Sula, Honduras. The developers had in mind a small jacuzzi like pool, surrounded by terraces. [Read more] 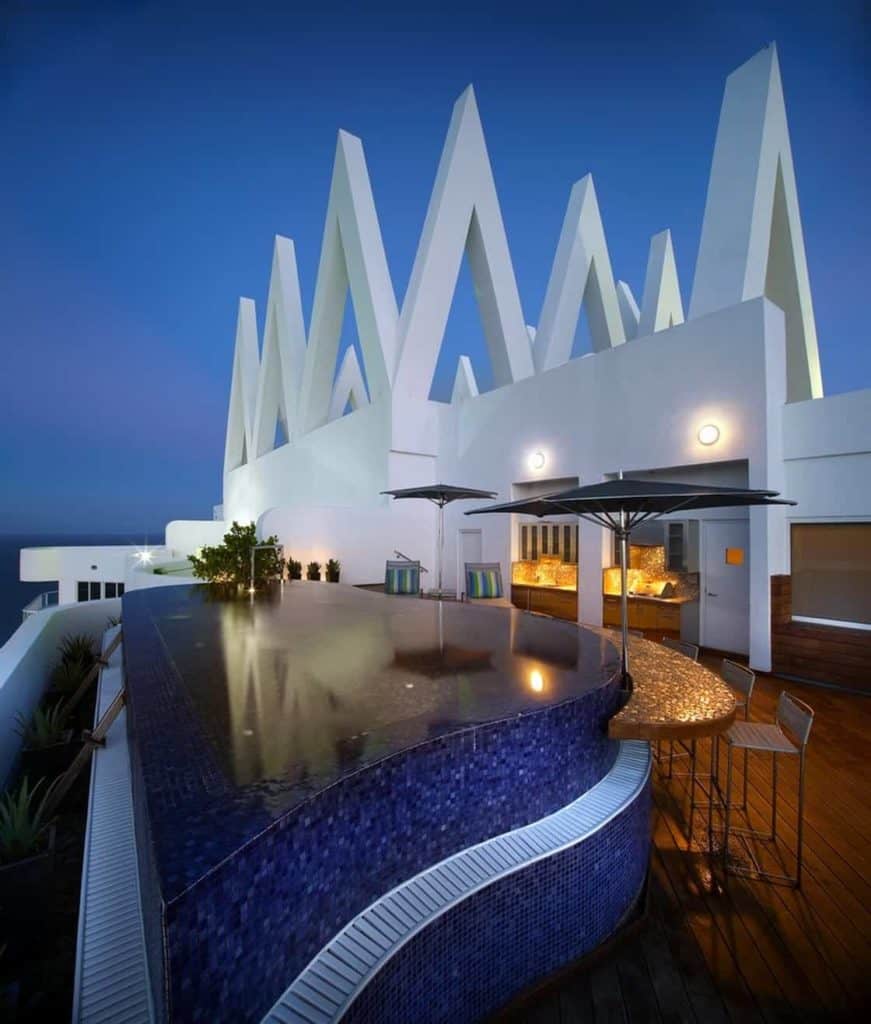 When Pepe Calderin first saw the condo he was most impressed with the views, which are truly spectacular. Unfortunately, there were also three tiny bedrooms crammed into the lower level, space-wasting hallways, an awkwardly placed kitchen, undersized baths, and cheesy builder fixtures and finishes. Calderin’s first step was to gut the developer’s layout and rethink it, turning the three bedrooms into two, relocating and refixturing the baths and kitchen, and opening the main level into one large, light-filled space. [Read more] 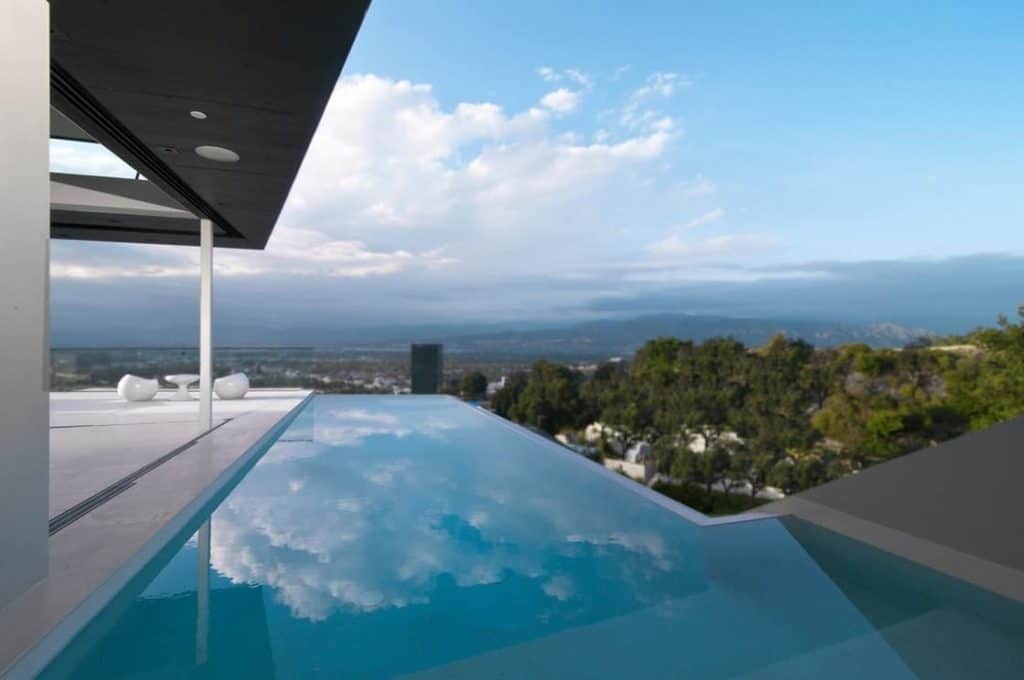 The historic Mulholland Drive winds it way through the peaks of the Santa Monica Mountains, offering sweeping views of the Los Angeles basin and San Fernando Valley. This scenic route, which also plays host to some of Hollywood’s elite, provides a quiet retreat from the bustling urban center below. From the street, 7691 Mulholland Drive has an unassuming presence. A twisting driveway is the only indication of the 5,800-square-foot structure below. Situated on steep incline, the design meets the challenges of the terrain and physical constraints of its L-shaped lot, presenting an optimal solution to a unique set of conditions. Its sunken nature not only guards against the harsh western sun, but also serves to maximize energy efficiency. As a result, the house seems to gently cascade down the hillside, allowing each level to have an unobstructed panoramic view of the landscape. [Read more]

Simply put, our goal with each and every project is to create a “total built environment” that is a modern reflection of our clients. We recognize that the investment and trust that our clients place in our hands is substantial and in doing so, we do not pursue the fashion of the moment, but rather, strive for a timeless product that remains fresh, exciting and inspiring for years to come. [Read more] 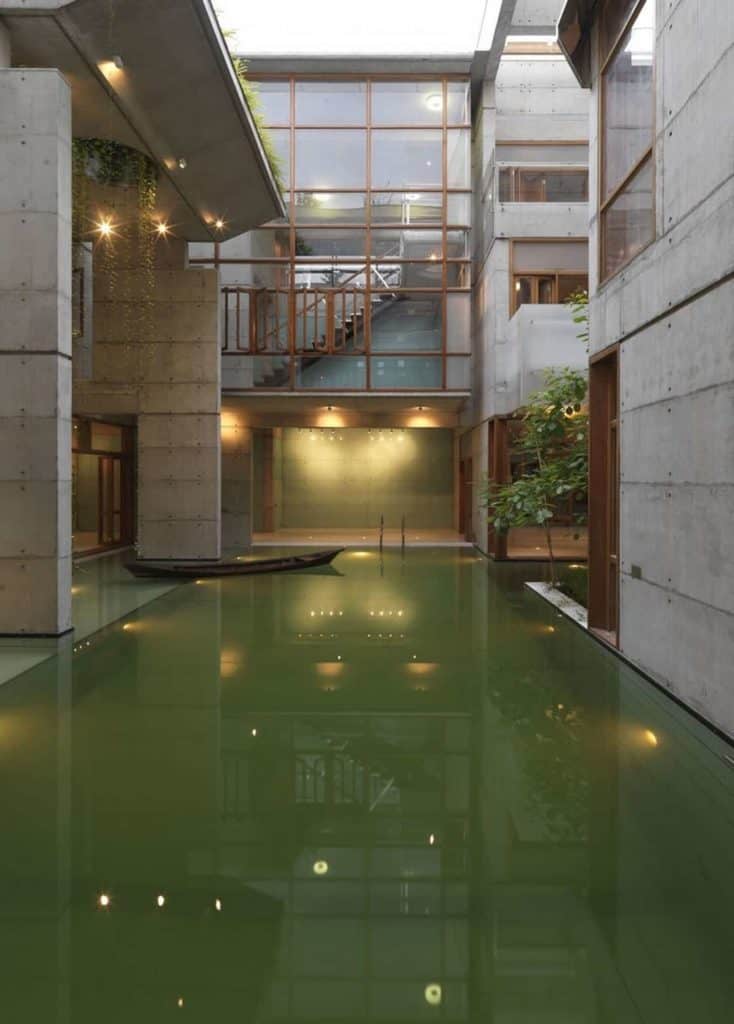 Water, channelizes its expansive existence subtly inside the weave of life, mingling toil and poetry into the land of Bangladesh. During Monsoon the 52 rivers that carry water across Bangladesh inundate two-thirds of the land. The water recedes, leaving behind fertile alluvial soil, transforming the landscape into large patches of paddy fields. Lalon, the 18th-century mystic minstrel of this land said, “If one thing is not there inside the body then it is not outside the body either.”  The human form has two parts – body, being the shell and thoughts as the soul. Shell and Soul are interdependent, yet independent; belonging to each other while belonging to themselves. Architecture is similar, with the building envelope as the shell and nature as the soul. [Read more] 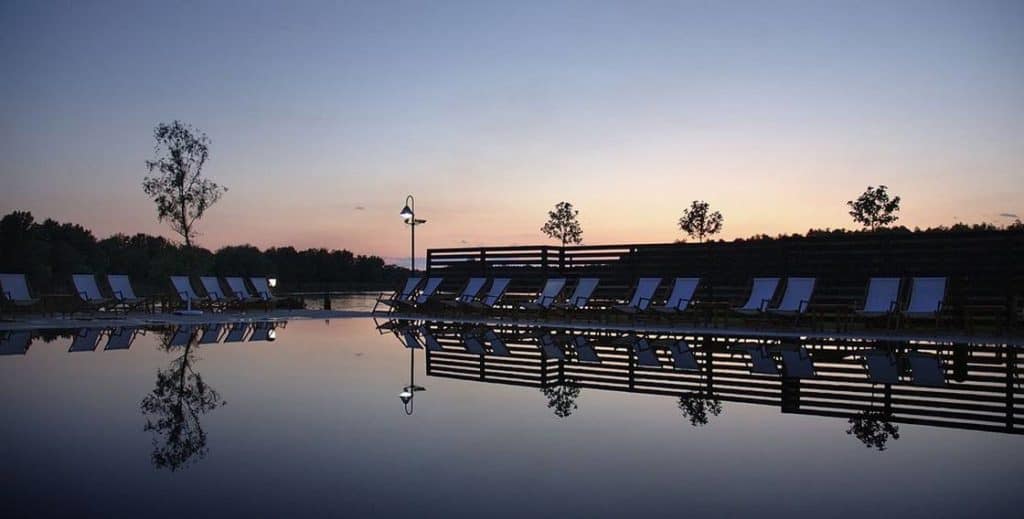 The idea of the architect was to endow the building with a modern and aesthetic  appearance using traditional local materials. That’s why light plaster was selected together with ceramic roof tiles and plenty of wood – for terraces, for pergolas and for shields.Thanks to the  flood forests  – in this part of the country wood has always been available for building village houses. Willow tree is probably the most characteristic tree of the region,  twigs and branches of willow trees were wickered to create useful household objects, such as baskets, armchairs, etc. This tradition was continued in the interior decoration of the spa – the reception desk was made of wickered willow tree, as well as the lampshades of suspension lamps and of consoles, and wicked willow branches were used to shape chests of drawers – all that was hand made by local ladies, in accordance with the local patriot attitude of the owner. [Read more] 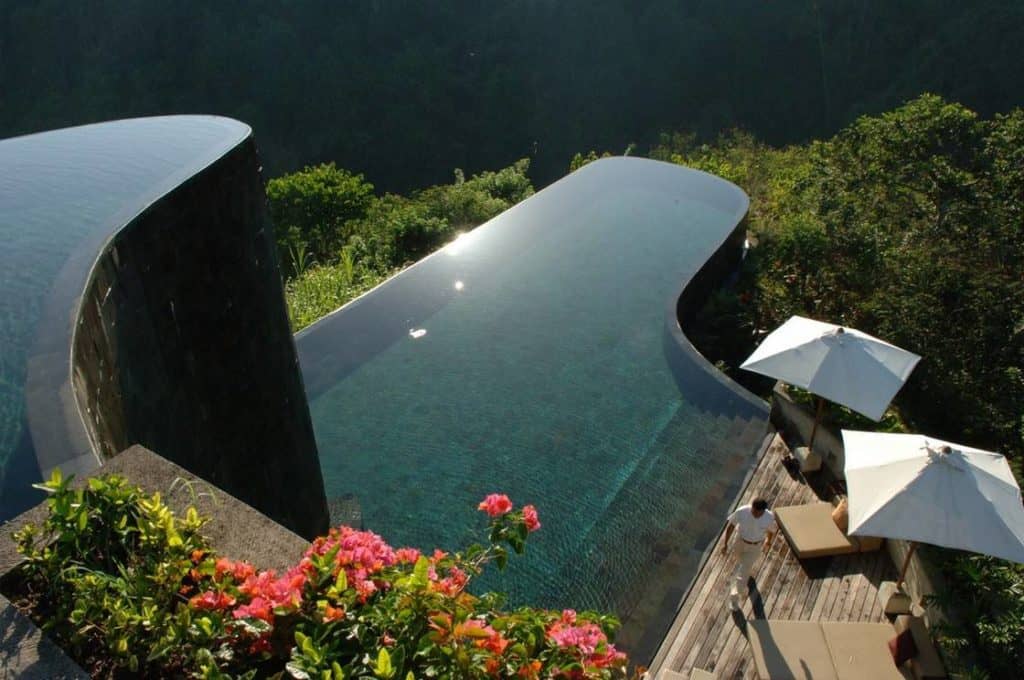 What goes inside the mind of an architect when faced with a challenge task of processing a steep cliff with an inclination off almost 45°, enveloped in lush vegetation with a trickling river beneath it and an ancient temple sitting nearby? Popo Danes magically transformed it into Ubud Hanging Garden, a Resort Hotel & Spa with 40 units of villa. [Read more]