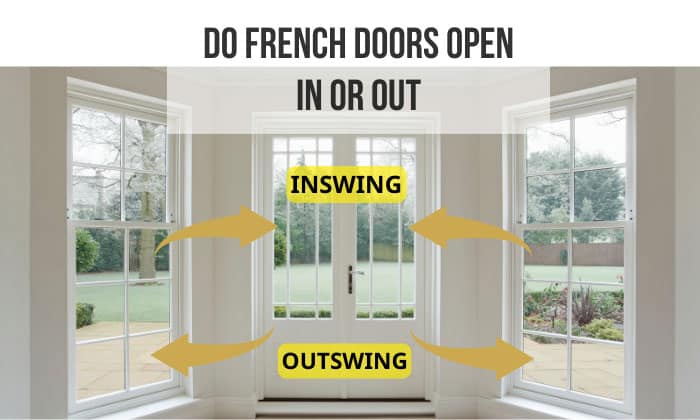 As most places don’t have strict regulations on which way a door swings, you have the freedom of choosing either. That said, the better choice can vary, depending on the type of door, available space, or your region’s weather conditions.

So, if you’re wondering “do French doors open in or out?” I’d say that either is fine. To make the ultimate decision, you’ll need to consider factors such as style, functionality, and personal preferences.

Still confused? Read on to find out more.

What is a French Door? 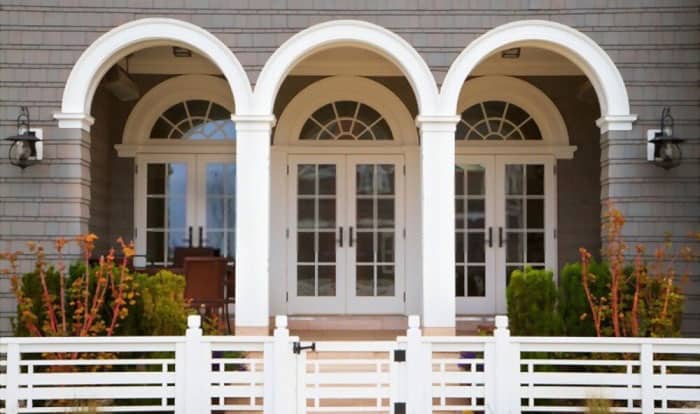 One of the identifying characteristics of French doors is that they always come in pairs, giving them a symmetrical design. Although exceptions exist, the majority of these doors are made of glass, which is why they’re so well-liked in homes lacking natural lights.

Another reason French doors are so favored is that they can evoke a sense of spaciousness. Looking at their standard sizes, it’s not hard to understand why. Even the smallest one is already 30 inches wide, and you can come across doors as wide as 72 or 96 inches.

As this type is often used by the entrance to the outdoors, it may also be referred to as a patio door. However, note that not all patio doors are French doors, as the former can also refer to sliding doors as well.

In contrast, French doors don’t operate by a sliding mechanism. Rather, they open by swinging on the hinges on two sides of the entryway.

Should French Doors Open Out or in? 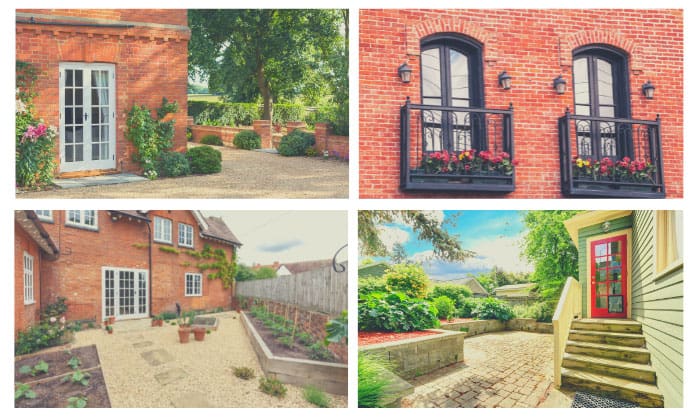 Ultimately, there’s no clear-cut answer as to which direction is better, just which one is more suitable for your specific case. To know which way your French doors should swing, you’ll need to know how each factor impacts their functionality.

Regardless of your preference, the first thing you’ll have to consider is the space available. If one side is too small or cluttered, it may not allow you to open French doors fully.

In other words, it’s not always possible to pick a side. Whether your exterior and interior French doors open in or out depends entirely on your home’s layout and furniture placement.

Note that the maneuvering clearance should be bigger than the width of the door. To be clear: it should be large enough that you can stand comfortably when opening or closing the door.

You may also want to look into the requirements for maneuvering clearances, which dictate how much space is necessary for a door to be fully functional. These standards will change depending on how the door is installed.

Because French doors are designed for one hundred and 80 degree opening, it’s also essential to pick a side that allows their panels to lay flush against the wall once opened.

Whether the balcony doors open in or out also boils down to the climate in your region.

If you live somewhere with heavy snow and your house doesn’t have a portico to prevent snow buildup, outward opening French doors will not be viable due to the potential leaks.

People living in windy areas should also think twice before installing exterior French doors that open out. If you open them and don’t have anything to keep French doors open, such as a door stopper, the winds may slam the swinging panels hard enough to cause damage.

However, it’ll be an entirely different story for those residing in places with high risks of storms—these individuals should choose french doors opening outwards. For one thing, such an opening direction allows for an easier escape. For another, the stormy winds can be strong enough to blow inward-swinging doors open.

French doors opening inwards are also not a good option for rainy regions. Outward-opening ones would be more suitable, as they don’t let the rain in as much, thanks to their compression gasket.

When deciding whether French doors swing in or out, you also shouldn’t overlook security. Between the two options, it’s not as easy to secure French doors that open inward—intruders can forcibly kick the doors open.

On the other hand, outward-swing patio doors can’t be opened by force. Their exposed hinges don’t pose a security threat as some may think, given that these hinges feature non-removable pins.

The good thing is that there are safety measures you can take to improve in-swing French doors’ security. One notable example is multi-point locking systems and strike plates. Two mortise locks on the active door (the one you open and close) will also minimize the success rate of intruders.

If you intend to open/close one door panel out of the two, it’s best that you fix the other’s flush bolts in place with small screws. This practice will permanently secure the passive door unless the screws are removed.

Before rushing to install the patio doors, you may also want to check the building codes in your area. Most places don’t have regulations, but some regions may demand that all doors swing outwards, whereas others will expect the exact opposite.

Local regulations aside, it’d help to be mindful of some general suggestions when it comes to the door’s swing direction. This can come in handy if your state doesn’t have any strict standards for which way the door should swing.

So, whereas the moving direction of your exterior French doors depends on many elements, most interior ones should open into the room. Your bedroom’s French doors, for example, should not open into the hallway, as it can block traffic flow or bump into someone walking by.

On a final note, exterior entryways with a screen door mean that the French doors should always open inward.

2. Inswing vs outswing French doors: which is safer?

Anyone concerned with security issues will find outswing doors a better option, as they are less likely to be opened by force. In-swing doors, meanwhile, can be kicked open if the intruders are strong enough. Deadbolts and strike plates may minimize the risks but don’t negate them altogether.

In order to force an outswing French door open, you’ll have to yank on it. The thing is: it’s next to impossible to yank a door open, particularly if it’s the strike side.

One slight advantage doors opening in have over their counterpart is that their hinges are on the inside. This can prevent burglars from tampering with the hinges to remove the door to get inside. However, this advantage is negligible, given outswing doors’ hinges are made to be unremovable.

Likewise, outswing doors will fare better with storms or hurricanes, whose strong winds can blast inswing ones open. Given the importance of keeping doors closed during such weather, you’ll appreciate the safety they provide.

Can I Reverse the French Doors? 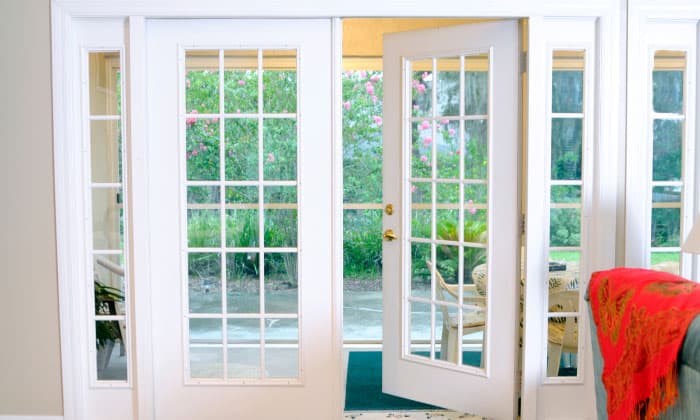 The short answer is no. As for the detailed response: you theoretically can, but there are so many complications involved that you’ll be better off buying a new door.

Even if you’re willing to go through the hassles, there’s no guarantee that the reversed door will offer the same protection against intruders and the weather.

French doors are designed to be either inward- or outward-opening. In other words, you can’t use something intended as in-swing doors as out-swing ones, or vice versa. You may mess up the gaskets, doorstop molding, and hinges.

To give you an idea, in-swing doors utilize sweep gaskets, whereas out-swing ones feature compression types. The primary difference between these two varieties is that the former depends on friction, whereas the latter doesn’t. Reversing their position can lead to the gaskets not working properly, resulting in leaks.

Although you may find French doors that both open inward and outward, there’s also the door frame to think about. At the very least, you’ll have to remove the door frame so that the molding and cills will fit.

Do Both Doors Open on the French Door? 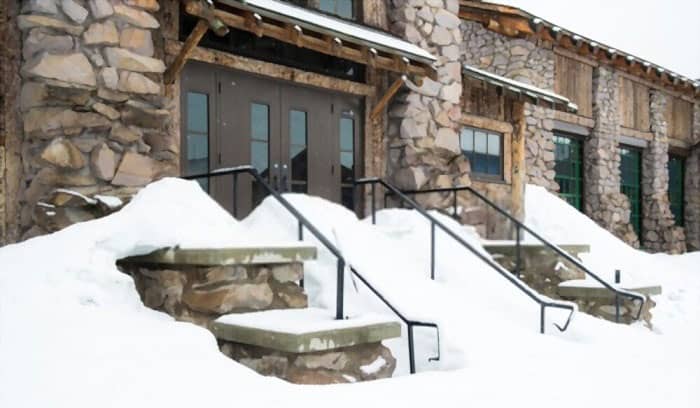 Yes, both sides of French doors can be opened and closed. The panel with the handle is called the active door, whereas the one with the securing latch is often referred to as the passive door. This passive side, while less frequently used, can be operated just like its active counterpart.

However, if you decide to screw the passive door’s flush bolts in place to improve security, you won’t be able to open this side. The only way for it to be operable again is to remove the previously installed screws.

Do French doors open in or out? There’s no definite answer to this question, as there are many elements to take into consideration. When you live in snow-prone areas, for example, inward-swinging doors are always preferable.

In short, only you can truly know the final answer to whether your French doors should be in-swing or out-swing. Think carefully about how safe your neighborhood is, your region’s weather, the available space in your home, and whether there’s any building code regarding the issue.

Do You Tip Appliance Installers and Delivery? & How Much?