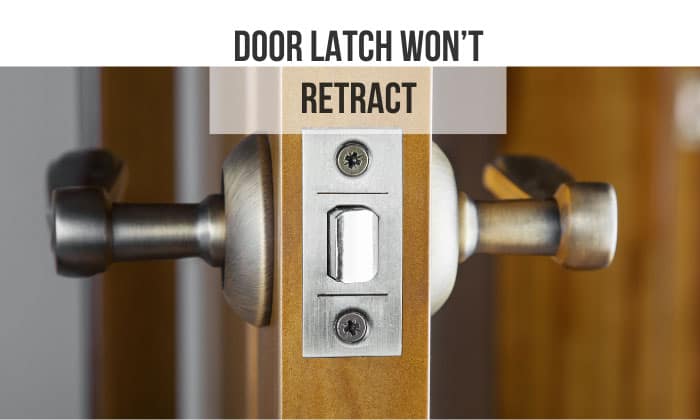 Issues such as the door latch not retracting can happen to everyone, especially when the latch is used for quite some time. Even quality products like Schlage door latch are no exception.

The solution to your specific problem depends on the cause of why your door latch won’t retract.

There are many reasons causing this door dilemma. Fortunately, all of the causes have a corresponding fix.

Dirt accumulation is the most common reason for the door handle latch not retracting fully. Dirt could mean oils, grime, rust, and accumulated dust that make any of the internal parts sticky.

If your door latch sticks out too far, yet not retracting back, despite you using great force, you should inspect the door for signs of dust and rust and do a thorough cleaning. 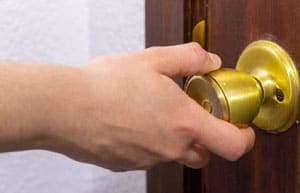 A jammed door thumb latch can result in the door not swinging back in properly. If the metal door latch is stuck or jammed, it can be caused by either of these things:

To check if your door latch is jammed, apply pressure on the latch or try to move it in and out repeatedly. 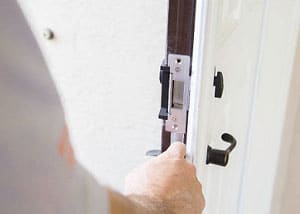 A misaligned strike plate can occur due to an improperly-installed door, or when the wooden door inflates from moisture. In fact, if the strike plate is too far back, too high, or too low, it cannot accommodate the latch whenever you try to close the door.

As the latch wouldn’t shoot into its designated hole, it wouldn’t retract the latch unless the knob is turned.

Unless you reinstall the entire door latch and knob properly, this issue could happen again and again.

A door latch has many moving parts. The broken part could be the spindle hole, spindle, and other internal mechanisms of the door latch. Regardless of brand, if the mechanism inside is broken, it would result in a loose latch or difficulties in closing the door. 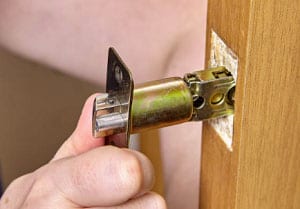 If you looked at the strike plate, the door latch itself, and other door latch mechanism but continue to have issues, you might be focusing on the wrong thing.

Instead, check the following parts: 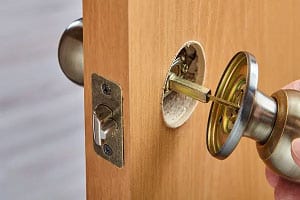 A door latch stuck closed could mean a sticky latch. Wet wipes and vinegar are the recommended remedies for this issue, depending on its severity.

After cleaning the door lock, you can reattach the latch, spring bolt, and strike hole plate properly. Make sure to align the parts well to avoid further issues.

If the insides are rusty, the door latch doesn’t go in all the way. You’ll need to use a lubricant to clean off the rust and protect the parts from drying out.

Let’s say you remove the build-up dust and other particles from the metal latch, but it’s still not springing back after being close, it’s time for lubrication.

You need to squirt it with a quality multipurpose lubricant or oil a couple of times. Make sure you move the latch in and out repeatedly for the oil or lubricant to seep into the nooks and crannies.

Solution #3: Apply some force on the latch

We can fix a door knob latch that is jammed by hitting it with the hammer several times. With just enough pressure, the door latch can open freel again, but if the issue persists, you should check and repair the door lock’s internal gear.

Solution #4: Realign the strike plate or install a new one

If the problem with the strike plate is moisture-related, you should reapply finishing to the door’s wood. Do note that this could happen again in the future, usually during seasonal changes, so schedule the finishing ahead to prevent moisture reoccurrence.

If the problem with the strike plate is expanded wood, you can adjust the plate and realign it to the latch. This would require more work, but it offers a more permanent solution than a simple realign.

If you discover that the strike plate is misaligned due to foundation issues, you might need to hire a professional who would reinstall everything from scratch. 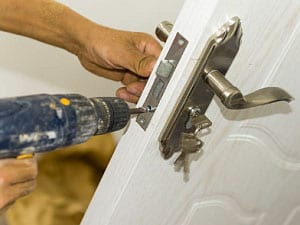 The springs are often the first to go, so check the door latch for a broken mechanism. If the door latch is still under warranty, call the manufacturer for a replacement.

You’ll need to dismantle your door knob and decide if the part can be replaced or install a new door latch completely.

Solution #6: Realign the strike plate, door hole and door frame to the latch 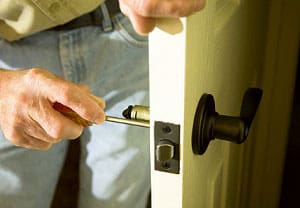 Realign the door latch to your door’s frame, hole, or strike plate. This may require any of the following:

Parts of a Door Latch 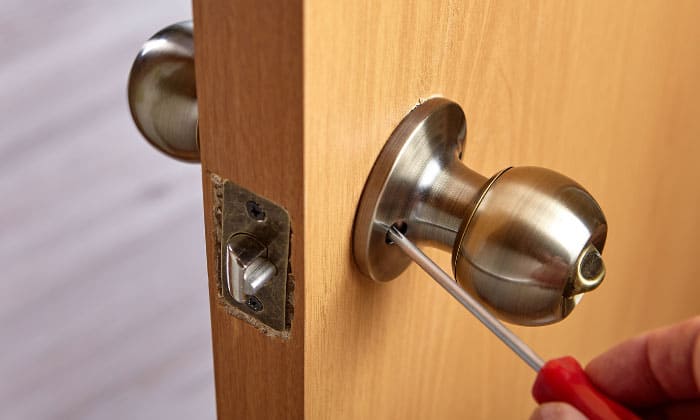 It’s easier to solve any door latch issues if you are familiar with the basic parts. These include:

There are two types of bolts or latches – A spring bolt (one that features a spring clip) and a deadbolt (one that doesn’t use any spring mechanisms but requires a key or knob to lock or unlock).

Note that other brands or models would have additional parts. For example, a door thumb latch would have a tiny plate that pushes the mechanism to unlock the door. 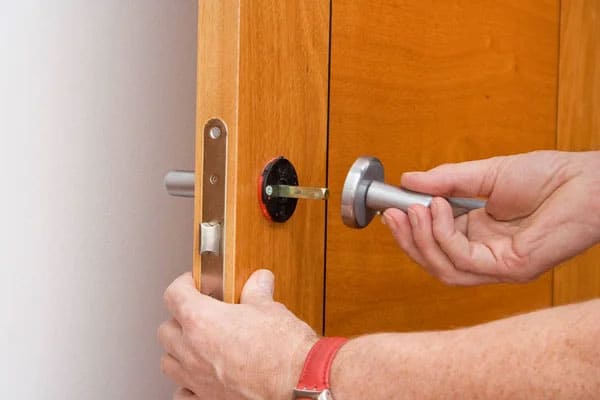 Can a locksmith open a latch?

Yes, professional locksmiths are trained to open all kinds of locks using tools of their trade, but there is no guarantee that locksmiths can fix your malfunctioning door latch.

Why does my latch not retract when pushing or swinging the door shut, but retracts when the knob lever is used?

This is a common question and nothing to worry about.

In this case, the door latch won’t retract because you have a deadlocking latch bolt. This type of latch is designed with a plunger and a spring-loaded mechanism (that is disabled when the door is closed).

Can you adjust a door latch?

Most modern latches on the market today are adjustable. You can adjust the backset between 2-3/8″ and 2-¾.”

Can you replace just the door latch?

It should be easy to replace a door latch yourself. Once you remove the existing latch, you just need to follow the instructions written on the back of your replacement kit.

Most manufacturers also have how-to video tutorials of their specific door latch models, so Google the make and model then follow along.

If your door latch won’t retract completely, you have to solve it immediately.

In some cases, the inconvenience of being unable to close the door without turning the knob is tolerable. But in others, a broken door latch can be a major security issue.

The good news is the solutions above are not complicated. Once you’ve determined what’s causing the door latch to malfunction, it is possible to fix your Schlage door latch (or other brands) by yourself.

Do You Tip Appliance Installers and Delivery? & How Much?