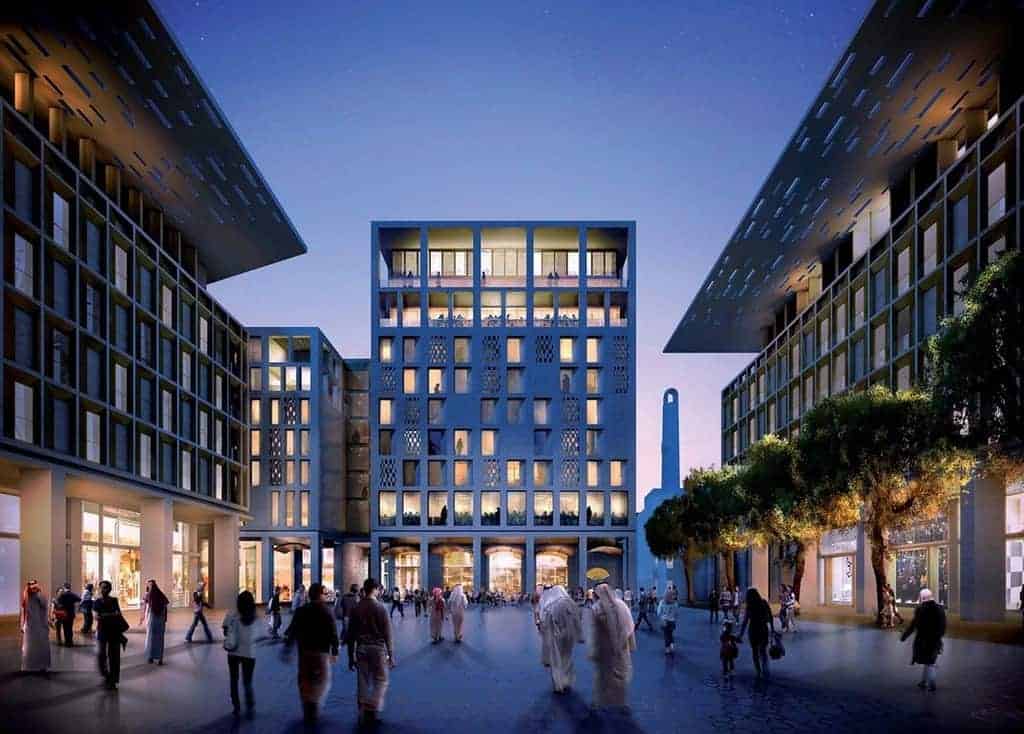 The winning projects in 12 of the awards categories have been announced, including a library clad with firewood, a house covered in plants and three projects in Singapore. The winners have been selected from over 300 shortlisted entries in the sections of completed buildings, landscape and future projects. The completed buildings will also go forward to compete for the prize of World Building of the Year 2012, chosen by a jury that includes architects Ben van Berkel, Moshe Safdie, Mok Wei Wei, Jürgen Mayer, Yvonne Farrell and Kenzo Tange.

Here are the winners:

Atelier Arcau has won the civic and community award for its response to ‘a boring brief in a boring suburban context’. The architect, the judges said, transformed the brief ‘by a beautifully simple brief without forcing an agenda.’ The building, they said, ‘is unique to its context due to respecting a local archetype,’ and praised the architect for ‘making something out of nothing, for a discrete solution for sustainability and for dealing with a low budget’. 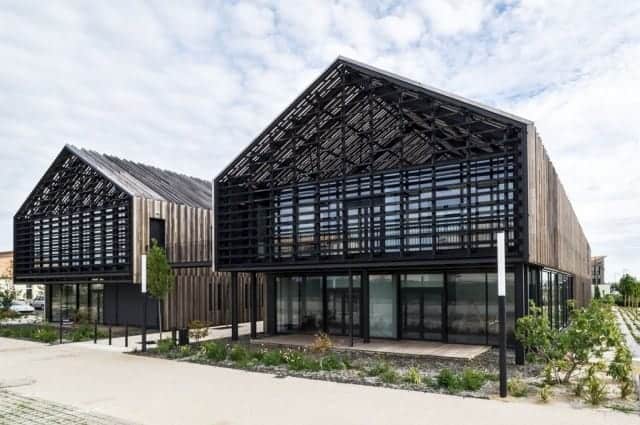 The judges decided that Liyuan Library in China, designed by Li Xiaodong Atelier, was the best cultural building at WAF. They praised the ‘simple inventive work’ which was, they said ‘deliberately respectful of nature’ and which works very well for its community. It was, they said, ‘very beautfiul and properly sustainable’ as well as very sensitive. 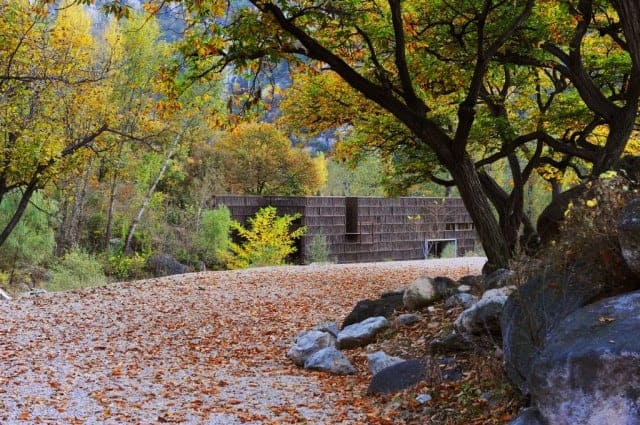 Stacking Green in Ho Chi Minh City, Vietnam, designed by Vo Trong Nghia Architects, has won the house category. This tall thin house on a narrow plot is, said the judges, ‘a holistic piece of architecture with great clarity of vision and strength and memorable iconography’. They added that it ‘is a simple yet elegant solution to a common problem in developing cities and offers an easily repeatable typology. It deals elelgantly with issues of security, privacy, climate and light in a poetic yet economical way’. 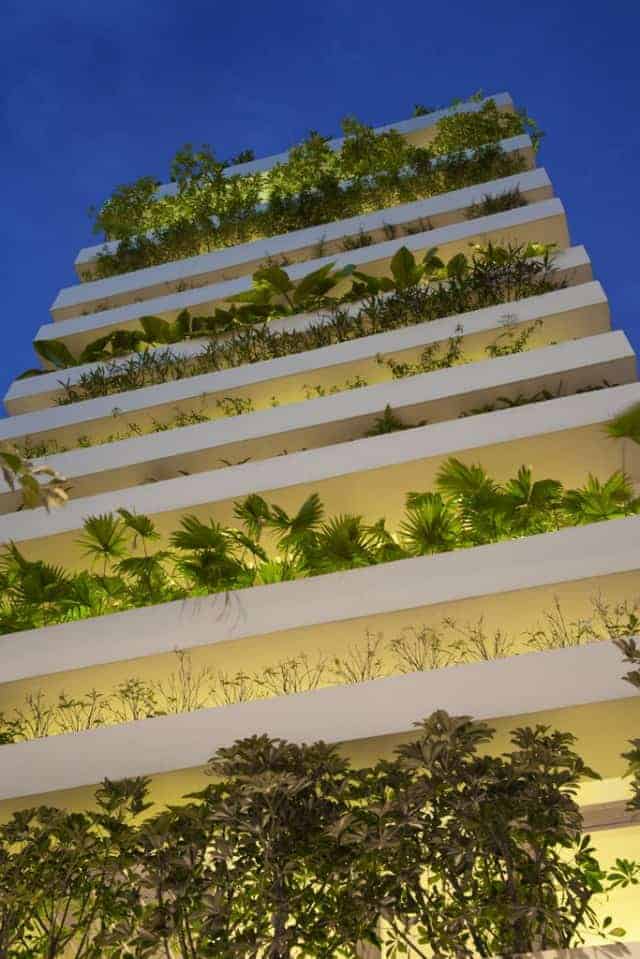 Martin no. 38, a development in Singapore designed by Kerry Hill Architects, has won the housing category. The judges said that it had been planned in a way that grew from the location and climatic concerns in a disciplined, simple and logical way. ‘The materials and details are simple and refined and seamlessly integrated everywhere,’ they said. They also found that ‘the architecture of the building has a remarkable clarity and is able to react to the changing nature of the day and night. It will contribute to Singapore’s architectural heritage.’ 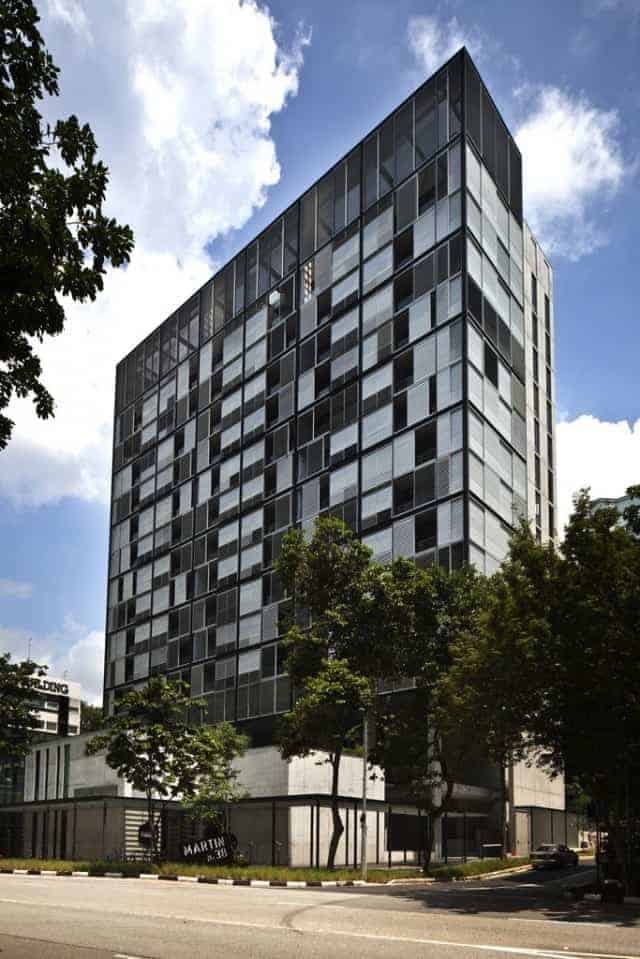 Plaza España in Adeje, Spain, designed by Menis Arquitectos, has won the new and old category. It was, said the judges, ‘a transformative project that uses the removal of buildings to open up an enlarged public plaza to an incredible landscape. ‘The addition of a small, underground museum adds to the surprise and unique understanding of how to activate a new public amenity – but more importantly it defines a new way for the town to appreciate its own identity and context, away from its role as a tourist destination.’ They emphasised that it was a bold response that ‘allowed the ‘un-obvious to become the obvious solution’. 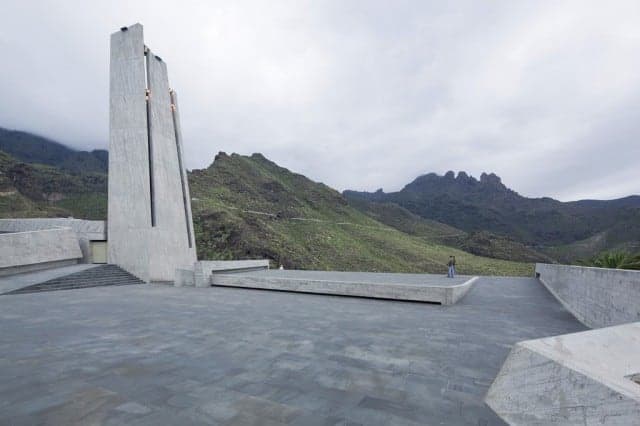 The Darling Quarter, in Sydney, Australia, designed by Francis-Jones Morehenthorp, is the winner of the offices category. The project, which creates a new urban quarter on the edge of the city, was praised by the judges for its exciting form and massing and the creation of a landscape that is accessible to the public. They were also impressed by its environmental credentials, scoring 6 stars (the highest possible) in Australia’s Green Star ratings and by its ‘exemplary corporate social responsibility’. And they also liked the interactive lighting that was available for use by the public. 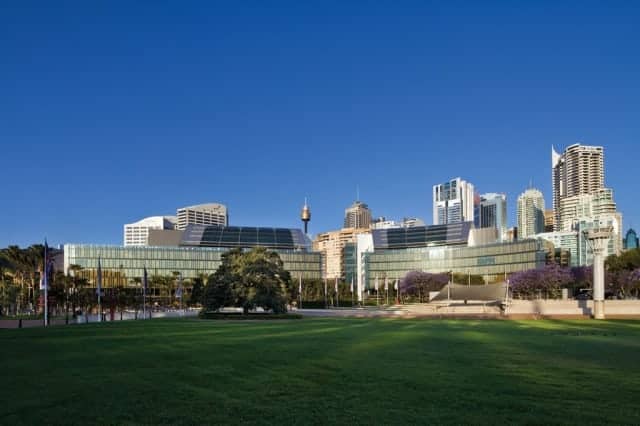 The Victoria Tower in Kista, Sweden, designed by Wingårdh Arkitektkontor, has won the hotel category. The judges praised the high level of ambiition which resulted in a solution that succeeded in urban terms and was also carried through to the guest experience. It was, they said, ‘refreshingly original in a genre where corporate hospitality interiors predominate’. 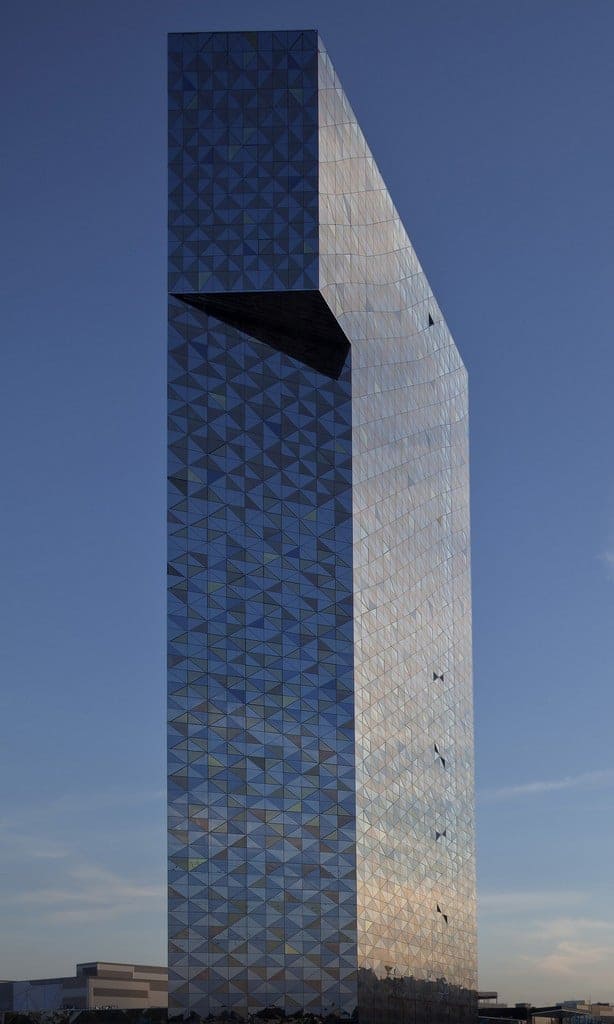 A team led by AECOM | Heart of Doha scheme, Qatar

A team led by AECOM is the winner of the future projects masterplanning award for the Msheireb Heart of Doha project in Qatar. The judges praised the project as ‘a fine-grained masterplan stitched in to the existing fabric of Doha’. It was, they said, ‘a creative, modernist interpretation of traditional arabic urbanism’ and ‘a great prototype for Middle Eastern urbanism’. 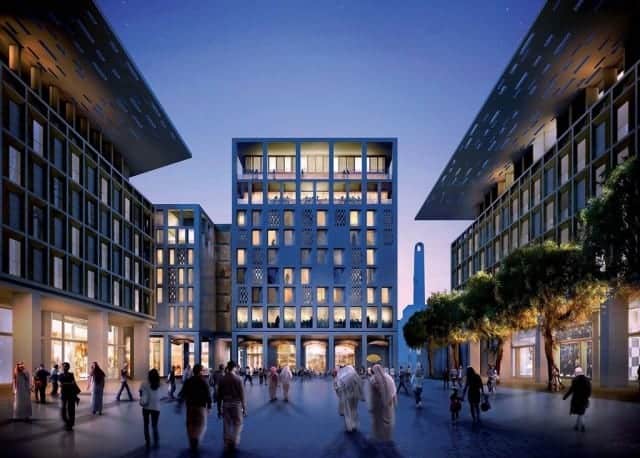 Wilkinson Eyre has won the display award for its cooled conservatories at the Gardens by the Bay in Singapore. The judges commented: ‘This ambitious project from a fully integrated team is awe-inspiring in its scale and form, and sets a new standard for ecological and environmental design.’ The conservatories constitute, they added, ‘an icon without a signature architect.’ They were particularly impressed by the use of tree cuttings as an energy source. 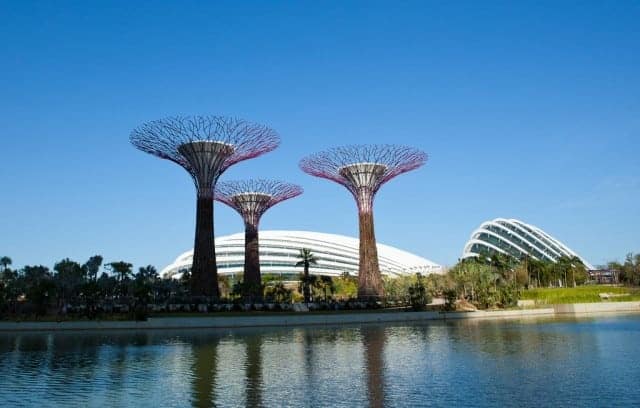 The Fazenda Boa Vista golf clubhouse in Brazil, designed by Isay Weinfeld, has won the sports category. The judges commende its simple elegance which they said reinvestigated the clubhouse typology. It was, they said,, ‘one of three projects on the estate flawlessly executed on a large masterplan’. 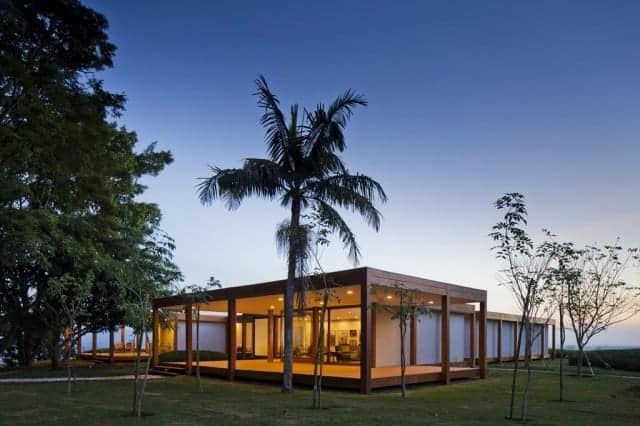 The SonyCorporation’s building in Osaki, Japan, designed by Nikken Sekkei, has won the production, factory and recycling category. The judges said it was: ‘an exemplary well-resolved high-rise industrial building with considerable environmental innovation’. They were impressed by the use of traditional materials for modern purposes. The judges highly commended the Hexagon/ Aron R&D Centre in Tokai-city, Japan, designed by Osamu Morishita Architect & Associates. It was, they said, ‘a very well-executed scheme with much innovation and detail quality’. 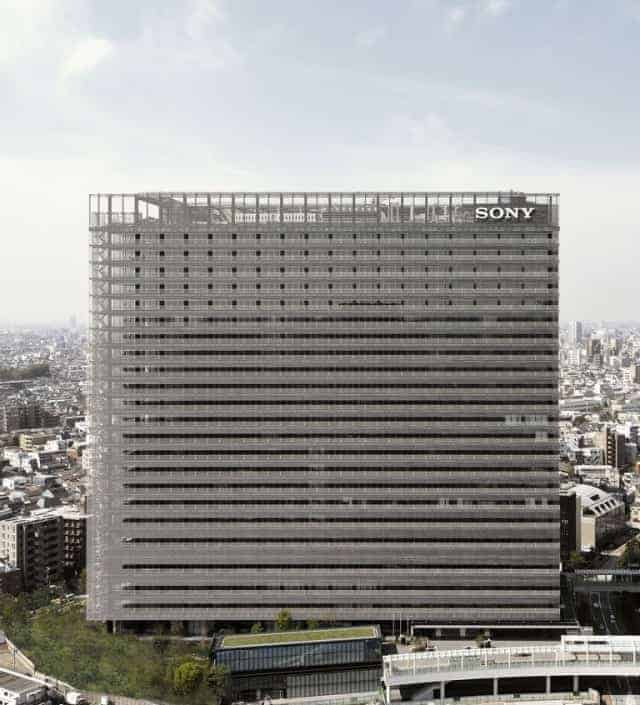 P.A.C |  The Xtra-Herman Miller shop in shop in Singapore

The Xtra-Herman Miller shop in shop in Singapore, designed by P.A.C, has won the shopping award. The judges said it was ‘a successful expression of the HermanMiller brand, combining natural materials (wood) with desgin and new technology. The contouring of the ceiling which becomes a wall successfully creates a sereie of warm spaces and a comfortable environment.’ 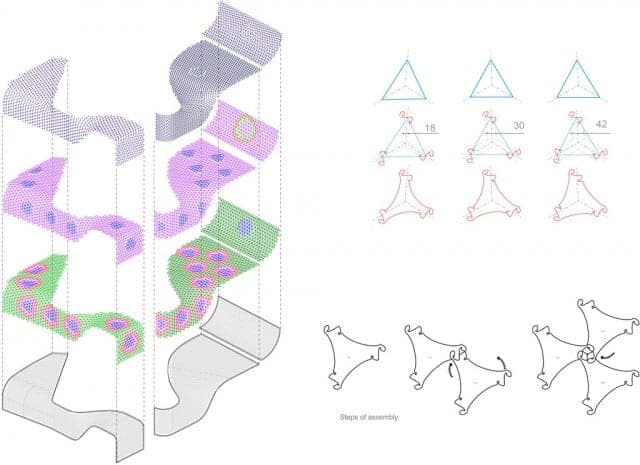