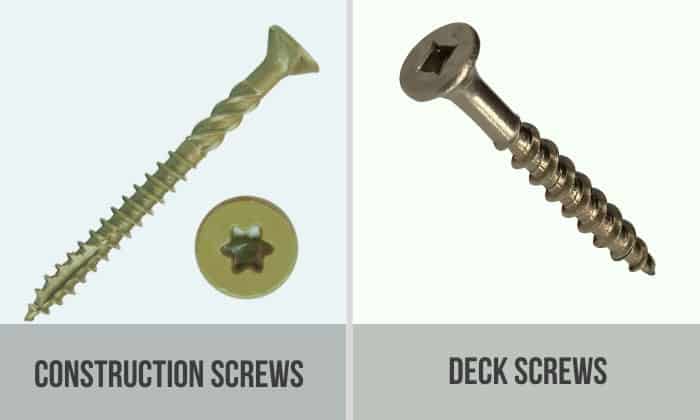 At a glance, construction screws vs deck screws can look somewhat similar, so it’d not be a surprise if a novice mistakes them for being one and the same. Only upon closer inspection will you notice the differences, such as in size or material.

Given how these two types of screws are used for different purposes, it’s important to be able to tell which from which, or else the quality of your structural elements will suffer. To give you an idea, here’s a short comparative table. 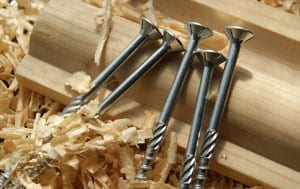 Also referred to as structural screws, construction screws are thin yet extra-tough fasteners. They are very popular, mainly due to their impressive strength, with some being able to hold up to 400 pounds of force.

Aside from their strength and durability, construction screws don’t need pilot holes – this is because they have a drill bit at the tip. Thanks to their sharp tips, the screws’ contact points will have no trouble piercing the material without damaging it.

You can also recognize these fasteners by the long smooth shank and threaded lower half. The head of these screws can be either hexagon or flat. 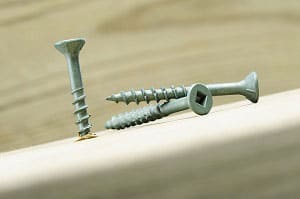 Deck screws are certainly not the strongest screws around, given that they typically can hold just about 80-100 pounds. Only high-quality ones will have deckmate screws shear strength of up to 200 pounds.

Unlike construction screws, deck fasteners usually require pilot holes to preserve the material’s structural integrity, although the necessity may vary depending on the tip. In any case, they feature a long shank and spiraling thread from their middle downward.

Deck screws have several head styles: trim, truss, round, cap, hex, as well as flat and bulge heads. Among these, the last one is the most popular and can be spotted in both structural and construction applications.

Construction screws are often made of stainless steel, galvanized steel, or bronze, with the first option being the most common. That said, galvanized steel is more durable, especially when it comes to protection against degradation.

One reason construction screws are so durable is that they’re heat-treated. Because the heat hardens the material, the fasteners have better wear resistance and tensile strength.

When used outdoors, these fasteners must be coated with an additional protective layer – this is typically zinc. This layer can also improve the fasteners’ toughness.

You can find many heat-treated deck screws on the market. Brands that offer them include DeckWise, Wovar, and Teco, to give some examples.

Because these fasteners are often used as exterior screws, it’s important that their materials are not prone to rusting and corroding. This is especially true for people living in coastal areas, where constant salt exposure can wear down the metal.

Deck screws are usually made from steel. The material can be galvanized or coated, but stainless ones are the best choice for corrosion resistance. Copper is another popular material, given their resilience in corrosive environments as well.

When you put the two screw types side-by-side, you’ll easily notice that construction fasteners are longer. Whereas structural fasteners’ sizes fall between 3.2” to 12.6”, the deck variety is much shorter—only around 1 ⅝ to 6 inches.

03 What Are These Screws Used For? 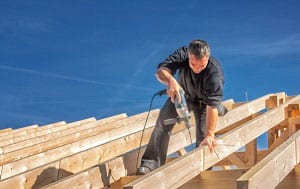 As they are incredibly strong and long, construction screws are often used for large-scale projects and building structures such as walls, roofs, etc. I’d recommend these for anything where durability and holding power are of utmost importance.

Categorized as a wood screw, these fasteners can be used for most wood types – the only exception is pressure-treated ones. This is because their high copper content will trigger and accelerate corrosion in the galvanized screws.

You can also use construction screws for framing as an alternative for nails when you want to prevent plank slippage—a common issue with nails. 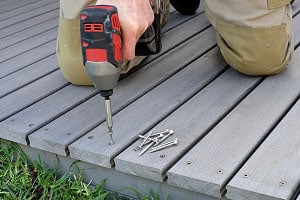 Their application is not as versatile as construction fasteners — deck screws are often reserved for deck construction. These fasteners can countersink, so you don’t have to worry about catching your foot on their heads when walking on the deck. As such, they are also suitable as floor screws — or subfloors, to be exact.

Unlike construction types, deck screws are compatible with pressure-treated wood. That said, you’d want to check their product description to make sure they’re tailored for pressure-treated lumber, not composite ones.

Note that under no circumstance should you utilize these fasteners as framing screws. They don’t have the same strength as their structural counterpart, so they will easily buckle under pressure.

While construction screws are favored for their minimized likelihood of shear-off, their high price may put some people off. Even if you’re willing to pay, you may find structural screws hard to come by.

For instance, one pound of construction screws can cost roughly $14. Meanwhile, you will only have to pay around $5 for decking screws per pound. 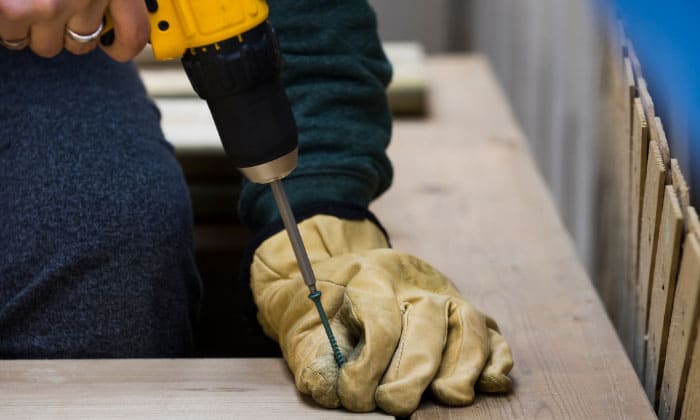 Are construction screws good for wood?

Yes. In fact, construction screws are exclusively used for wood. Should you attempt to install a project made from metal, for example, the entire structure may fall apart soon, as these screws aren’t suited for holding such material.

Are deck screws as strong as wood screws?

Absolutely. This is because deck screws are made from material of higher grade compared to wood fasteners, and their sizes are also bigger.

Even when you compare their resistance against corrosion, deck screws will still come out on top. Unless you bought fasteners made for exterior use, their wood counterparts can only be used inside. Otherwise, the wood screws will rust or cause further damage to the wood.

How much weight can a screw hold?

Most screws’ weight capacity falls within the range of 80 to 100 pounds, provided that they’re installed correctly. That said, this element can change depending on the material’s quality or thread type.

As you can see above, construction screws, which are heat-treated and made from galvanized stainless steel, can hold up to 400 pounds. However, high-quality deck screws can only tolerate up to 200 pounds.

No. Although deck and construction screws both belong to the same categorization, it would be a mistake to think of deck screws as structural.

As pointed out above, deck screws can hold 200 pounds at most. This is often not enough to bear the heavy loads that larger structures may have. Therefore, you should rely only on deck screws for subfloors or holding deck boards.

Can you use construction screws for deck?

You can, on the condition that the construction screws are specifically made for outdoor use. If not, no matter how strong these fasteners are, they’ll break within a year or two.

In addition, it would be a good idea to make sure the screw is of the right length for your deck planks for the fasteners to work properly. For instance, a deck 8 inches above grade should have a fastener of at least 8 x 2 ½ in dimensions.

By now, I’m sure you can compare construction screws vs deck screws. If anything, I’m confident that you can also give comprehensive answers when asked what is a decking screw or structural fastener.

Note that you should never utilize the wrong type of screw for your project. Otherwise, the fasteners may not be able to properly secure the parts. After all, I’m certain you don’t want to screw up (pun intended).

Are all your questions answered? If there’s still anything you’re unclear about, be sure to let us know.