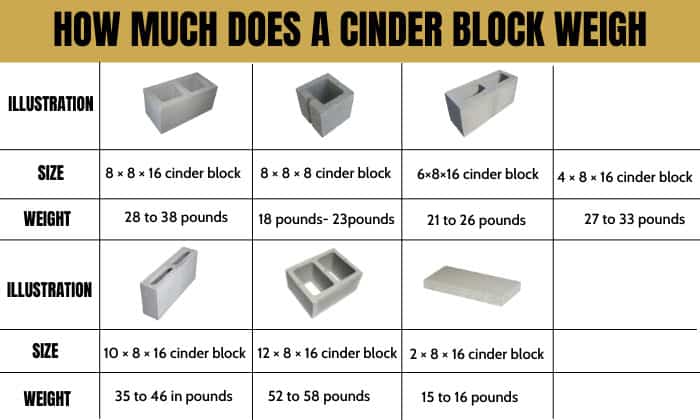 As cinder blocks vary in weight, it can be challenging to calculate the total load when it’s essential to pay attention to the weight limit, such as your floor’s maximum holding capacity.

Fortunately, there’s such a thing as a standard cinder block—measuring 8”x8”x16”—which you’ll most likely come across. Hollow blocks with these dimensions tip the scale at 38 pounds, whereas solid ones can be as heavy as 76 pounds.

In other words, to answer the question of “how much does a cinder block weigh?” you’ll need to take into account various factors, such as measurements, design, and material. To get an idea, check out the weight chart below.

How Heavy is a Cinder Block

1. Based on cinder block sizes 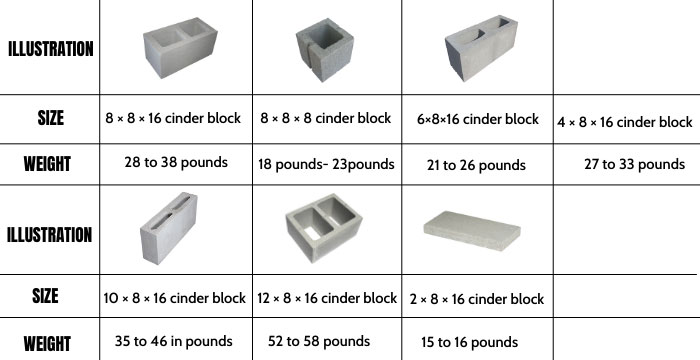 One of the aspects that makes it tricky to pin down a definite weight of cinder block is that this measurement varies depending on its density. As a result, you may come across blocks of the same size that weigh differently.

That said, you can usually come to a rough estimate regarding how heavy the block is based on its dimensions. As the weight and size are directly proportional, it makes sense for a bigger block to be heftier than a smaller one.

Below are the different types of cinder blocks and their expected weight. Note that the figures mentioned are dry weight, or the mass of the blocks when they are completely dry.

8-by 16 cinder block is the most common size and is considered the standard. If your foundation wall measures 8 inches thick, chances are that the builders have used this size.

You can expect this average cinder block size to be around 38 pounds. Nonetheless, because density varies, some slabs may only tip the scale at roughly 28 to 35 pounds.

The figures mentioned above are for hollow pieces only. Solid 8 inch blocks are much heftier, tipping the scale at 76 pounds.

Typically used for building columns or mortar joints, these half blocks are hollow and commonly weigh 18 pounds, with some denser slabs having a heft of 23 pounds. An airier one, however, may only be around 14 lbs.

It’s also possible to find a solid cinder block of this size. In this case, it’ll be a lot heavier, often weighing up to 56 pounds.

You can come across a 4 × 8 × 16 cinder block in both hollow and solid versions. For the former option, this building material for veneer and partition walls will be around 24 pounds. A particularly denser one, however, can be as heavy as 27 pounds.

A solid block of this size has a load of 33 pounds. It’s typically used for capping a wall, meaning it’s essential for keeping rainfall from seeping further down the structure.

A 10-inch building slab measures approximately 35 to 46 in pounds, but you can expect 43 to be the most likely case. Cinder blocks of this size are usually hollow, allowing you to put in rebar as means of reinforcement.

Typically used for larger structures, such as schools, a 12-inch slab is also hollow like its 10-inch counterpart. Given how bulky the block is, it’s not that surprising to see it tip the scale at 52 pounds, with some denser blocks weighing up to 58 pounds.

Like its 4 × 8 × 16 counterparts, a 2 × 8 × 16 cinder block is also utilized to protect structures from rainwater penetration. To do its job effectively, this building material is always solid, making it weigh 15 to 16 pounds despite its small size. 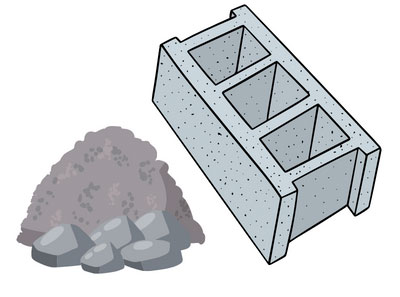 While they may look similar, blocks made from cinder and concrete will have different weights. For starters, concrete is stronger and usually heavier than cinder, making it preferable when durability is of utmost importance.

However, as mentioned above, if made from a dense mixture, cinder blocks can be just as hefty. This is why a hollow 8 x 8 x 16 concrete block can share the same mass – 38 pounds – as a cinder block of the same size.

That said, it’s far more realistic to expect a concrete block weight to be greater than that of cinder slabs.

3. Based on the state of the block 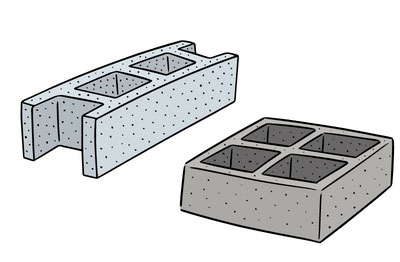 Another thing you’ll need to take into consideration is whether the blocks are wet or dry. As they are highly porous, cinder blocks can absorb water and become heavier. When this happens, their load will change, depending on how much liquid they soaked up.

So, how heavier will a soaked cinder block be compared to a dry one? This again boils down to the size of the slab and whether it’s solid or hollow, but the most likely range is between 0.5 to a little over 2 pounds. 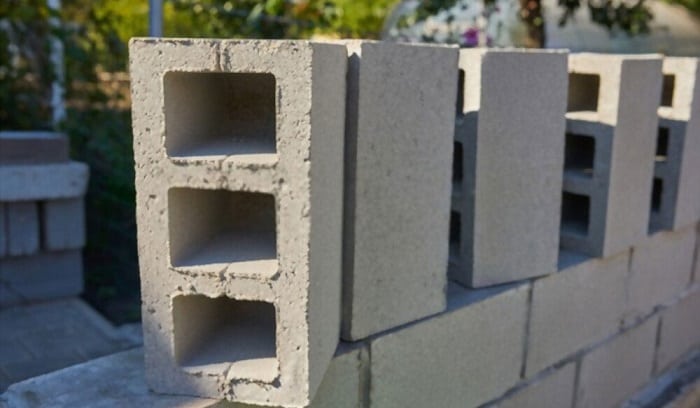 How much does a cinder block cost?

Compared to some other building materials, such as wood, cinder blocks cost is pretty affordable – averaging less than $5 per piece. In practice, each cinder block will only set you back $1 to $3.

Where to use cinder blocks?

The applications of cinder blocks aren’t limited to building or capping walls only. Check out a few other creative ways to use cinder blocks below:

As there is no reliable cinder block weight calculator as of date, the next best thing you can do is to get a rough estimate of how heavy each individual slab is. This can be no easy task, considering how the mass can vary depending on the size, density, material, and whether the block is wet or dry.

If you intend to find the answer to “How much does a cinder block weigh” by measuring one slab and multiplying it by the number of blocks needed, make sure it’s dry. This way, you’ll get the most accurate result.

How Long Should Curtains Be for a 9 Foot Ceiling?